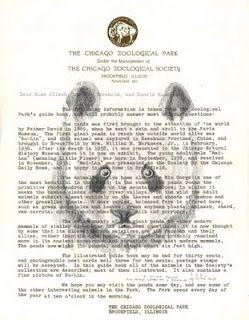 The middle of August we made a trip to Billings, Montana to search for old paper. The first place that we stopped had large map drawers full of paper, but I could only find one piece of paper that really held my interest, and this is it.

Sometime in the early part of the school year of 1948, Rose Allisch, Lorette Borsheim and Donald Knudson of McCabe, Montana, wrote a letter to the Chicago Zoological Park inquiring about the GIANT PANDA BEAR. This letter is a response to their inquiry.

This year is the 140th anniversary of the discovery of the Giant Panda by a Westerner. A French priest by the name of Father Jean Pierre Armand David described the panda that had been shot by hunters in the Sichuan province of China in 1869. Until Father David described the panda in that year, the panda was virtually unknown outside of China. The world is still fascinated by this animal that may indeed not even be related to the true bears.